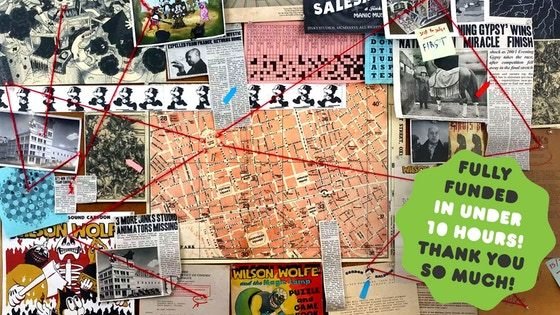 Can you give an idea of how long it takes to complete?

Game length is one thing we had a bit of trouble describing in our campaign, since (because of the nature of the game) there was so much variation among our playtesters.

It’s not a traditional board game where there is a set procedure - where you roll dice, move a piece, take a card, move to the next player - it’s far more free-form than that, and what might take one person 10 minutes might take other people 2 hours. When multiplied over the whole game that’s a big difference in predicted playtime!

Likewise, just listing the number of puzzles can be misleading, since some of the puzzles are relatively simple, and some are really complex rabbit holes that lead you searching around on-line and solving little sub-puzzles etc.

There are dozens and dozens of puzzles that you could work through as ‘stand alone’ games, with a little solution of their own that gives closure. There are around 20 such cases for the Silver package, around 35 for the Gold, and around 50 for the Platinum. The time on each varies widely - it depends how deep you want to get into the story; if you want to piece together the background of every mystery via the letters and articles you could get lost for ages. The estimates we give on gameplay time are rough estimates for this reason.

Overall we feel it’s best to say it’s a lot like reading a mystery novel, and it should have a similar sort of pace, something you unravel over weeks or months rather than a single night. Sorry for the long reply, as I said, it’s a little tricky to describe accurately!

Is there an intended 'age appropriate' range? For the content, not so much the level of difficulty?

It’s a little spooky and scary, with the mysterious cult element, but there is nothing too bad like nudity, sex, or even swearing. I’m not sure where that puts it, film-classification style, but I’d say you’re definitely on the safe-side at ‘15years+’. As you might see from some of the images, the storyline deals with a secret society of the type that were relatively popular in that era – roughly based around an Aleister Crowley type figure, so has occult themes.

How long was this in development?

Over a year in terms of design, but we have been batting the concept around for even longer than that.

Do you recommend multiple players?

It just depends on your personal preference. It’s a really good laugh to solve things in groups, and it’s a lot of fun when something finally clicks or someone notices a little clue that was missed, and everything jumps into action. But you could also play it alone and get sunk into it just like reading mystery novel. Also, because of how the game breaks down into smaller sub-puzzles you can do both. You could work on a bit alone, and then when you have friends over work another part. Each puzzle gives an answer, and then all those answers combined help solve a larger puzzle.

What happens if someone gets 'stuck' from progressing?

We are going to get a website up and running on completion that will give hints for each individual puzzle, and which you will be able to use to check answers.

What is the chance someone at Platinum tier solves the game only using Silver parts?

That’s not possible. Each extra tier is a bit like an ‘add-on’; you need the new components to play the new part of the game. It also adds new ‘questions’ as well as new answers.

Is the game re-playable? or is it a one-and-done type legacy game?

The game is re-playable. As long as you’re careful nothing is destroyed or permanently altered. Instructions on how to reset things and keep the game re-playable will be included in the introduction envelope you get with the game, along with the rules etc.

i.e. there are a couple of paper puzzles where you might want to circle things or draw lines on them etc. But if you want to preserve the game you can either just work in a notebook alongside the puzzle, or also we will be providing tracing paper overlays so you can scribble all over the puzzles without ruining the artefact.

In play-testing we found these overlays to be really useful, even if you’re not planning to replay, as it allowed you to try solutions out, get things wrong, and then just screw it up and start again fresh. The few puzzles that benefit from the overlays will be pointed out in the introduction & rules.

BackerKit is a service that crowdfunded project creators use to keep track of hundreds to tens of thousands of backers—from shipping details, pledge levels, preferences and quantities, whether they have paid or had their card declined, special notes, and everything in between!

The BackerKit software and support team is independent from the campaign’s project team—BackerKit does not handle the actual reward shipping. For more information about the preparation or delivery status of your rewards, please check the project's updates page.

How does BackerKit work?

After the campaign ends, the project creator will send you an email with a unique link to your survey. You can check out a walkthrough of the process here.

I never received my invitation. How do I complete the survey?

The most common reasons for not receiving a survey email is that you may be checking an email inbox different from the email address you used to sign up with Kickstarter, Indiegogo or Tilt Pro account, or it may be caught in your spam filter.

Confirm that the email address you are searching matches the email address tied to your Kickstarter, Indiegogo, or Tilt Pro account. If that doesn’t work, then try checking your spam, junk or promotions folders. You can also search for "backerkit” in your inbox.

To resend the survey to yourself, visit the project page and input the email address associated with your Kickstarter, Indiegogo or Tilt Pro account.

How do I update my shipping address?

When will my order be shipped, charged or locked?

That is handled directly by the project creator. BackerKit functions independently of the project itself, so we do not have control of their physical shipping timeline. If you want to check on the project’s status, we recommend reading over the project's updates page.

I completed the survey, but haven't received my rewards yet. When will they arrive?

As BackerKit does not actually handle any rewards or shipping, the best way to stay updated on the shipping timeline would be to check out the project's updates page.